Whispers Of The Children

I love writng for children. Here is my collection of poems and stories for them to enjoy and perhaps the child in all of us! 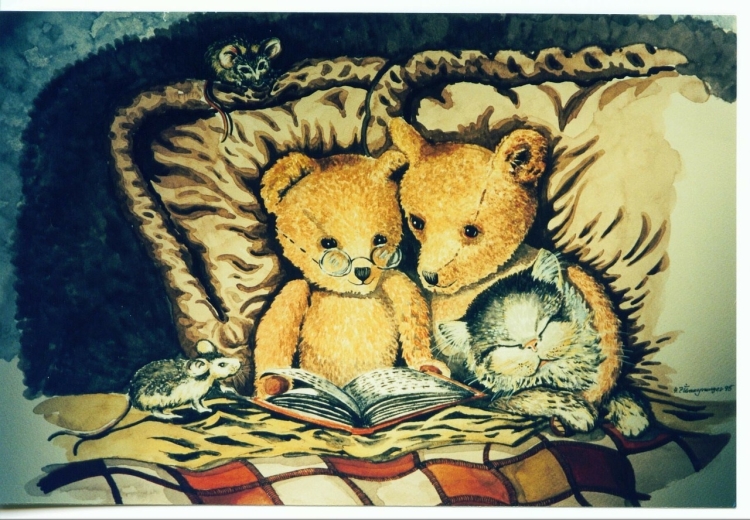 Looking out the window as the heavy rain poured down,
a very disappointed four year old Timmy began to frown.
The big parade was canceled due to it storming in town.

He was bored with coloring but his mood finally did change,
what a great idea he had as his room he began to rearrange.
His old teddy bear would help so Timmy wasn't shortchanged!

On teddy's furry head, he placed a hat with a feathery plume,
Tim's toy soldiers would march with a tiny cannon to kaboom.
A battery operated police car to clear the way in his room.

A monkey with drums to bang, the clown a whistle to blow,
a red fire engine with a siren and T-Rex's loud roar to show,
no rain could dampen this parade, folks would surely know.

Old teddy held a baton, a CD with marching music began its score.
To Timmy's surprise, teddy began to thump that baton on the floor,
his police car drove ahead, leading everyone out the bedroom door!

He watched in amazement as his animals paraded down the hall.
they marched to the music from room to room, Timmy was enthralled.
To the den where his parents were, the toys gathered one and all.

Mom was asleep in her easy chair while Dad the paper read.
In marched the parade of toys when the music stopped dead.
" Time to brush your teeth and get ready for bed," his dad said.

As they entered the den when the music stopped so did his toys!
Knowing what happened, who would ever believe a four year old boy?
It was bedtime and Timmy hoped for a sunny tomorrow to enjoy.

The toys were all put away and old teddy lay beside him in bed.
Sleep overcame Timmy as he pondered the day's events in his head.
Snuggling up to his boy, the secret safe, Teddy's stitched on grin spread!

There once was a hamster named Sandy.
Pretending in costume was just dandy
for he loved trick-or-treat and candy!

Sitting in his wheel deep in thought,
a brain-storming idea he did plot.
The perfect costume is what he sought.

Should he be a pirate dashing and suave?
A dazzling rock star dressed in mauve?

How about a kitty's squeak toy (yikes)?
Or a rodeo riding, macho cowboy (likes)!

Perhaps with a friend, a bride and groom?
Maybe a brave astronaut on the moon!

A witch, a pumpkin or a very spooky bat,
a baseball player or a debonair aristocrat?

Yawning, sleep overcame him it seemed.
Knowing just what to wear from his dream,
waking up the Halloween hammie beamed.

Excited, his nose and whiskers did twitch,
delighted he squeaked in a happy pitch.
His costume would be a sub-Sandy-wich!

With both my feet I push off earth.
Take off is a sweet skyward burst.

A magical ship to touch the sky.
Soon I'll pass birds flying by!

Reaching to clouds with pointed toes.
Guessing how high I really can go.

Mom calls, it's time to come in.
Slowly to earth I softly descend.

I have fun pretending whenever I swing.
Wonder what tomorrow's trip will bring? 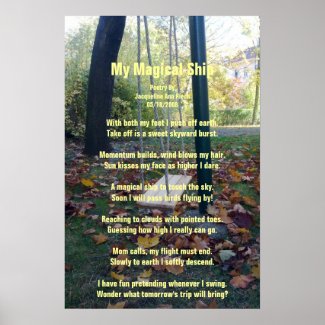 Settling down for bed I gazed at my hamster's home.
Sandy was asleep, tucked safely inside unable to roam.

I slept the whole night through but woke with a start.
Sandy's lid was pushed off and panic seized my heart!

Looking through every nook and cranny of my little room.
No hamster to be found, I worried was Sandy doomed?

Then I noticed I was missing my right soft plastic shoe.
I had left it beside my bed as a pair, shiny and new.

Were other things missing I wondered, asking myself?
Pencils and a sail from a large boat on the desk shelf.

Something drew me to the window, slowly I pulled up the shade.
Sandy, in the center of the pool, proud of the boat he had made!

The missing sail stuck firmly in the shoe I once wore.
Pencils I had written with now served as tiny oars.

Sandy waved and tipped the captain's hat upon his head.
He steered the shoe boat to help the sail and wind wed.

A swimming pool was his deep blue ocean, a tiny sailor brave.
Touching the snooze button, my ears from the alarm were saved.

What a crazy dream I thought as I dressed and put on each shoe.
The right one was feeling very wet and from it my foot I withdrew.

Picking it up, the small hole in the top flap made me blink.
In the hamster's house stood Sandy, giving me a quick wink!

No more boots or cold noses.
Soon there will be red roses.

Everything new this season brings.
We cheer hurrah-hurray for Spring!

When I was a child something wonderful did occur.
No one ever could explain what exactly did I hear.

Asking me to go weed around the garden flowers.
A boring task, Mom knew it would take me hours.

So I started weeding where the red roses grew.
Thinking of thousands of things I'd rather do.

Hearing several giggles, I looked all around.
But nothing in sight matched the tiny sound.

Back to weeding the garden, was that a sneeze?
It was so clear I jumped up off  both my knees!

Carefully I picked them up and gave each a hug.
Not one sound from either, my heart felt a tug.

Mom believes I had been hearing things that day.
My imagination she said because I wanted to play.

I am a grown up now, the mystery still confounds.
Did they giggle and sneeze in order to be found? 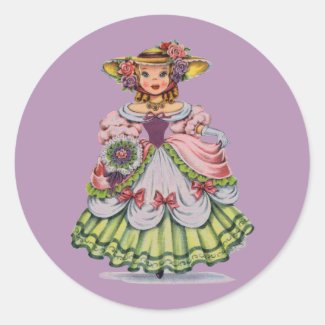 Will it journey past the zoo
or beyond the great lake blue?

Across the meadow, over the creek
floating above the mountain peak.

Soon more friends join the flight,
sky full of bubbles, what a sight! 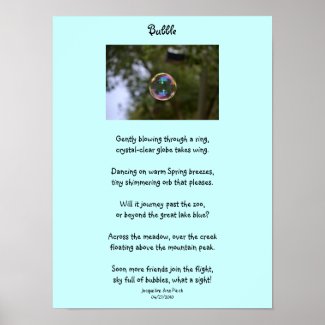 Bubble Poster For Children by SoulMusings
Meadow Myth
Is it a childhood wish or a summer morning dream?
Or just too tiny for the adult eye to have ever seen?
As bees gather pollen, on nectar a butterfly grazes.
The robin flies overhead, her sweet voice praises.
Meadow creatures stir as ethereal song fills the air.
Mice gathering seeds scamper up stalks and stare.
Gracefully balanced on a single spider's strand.
A wee tightrope walker among the flowers grand.
Her hair a lily covers, a dress of shimmering light.
Tiptoeing on the silver strand, a cherubic sight.
Pair of morning doves coo, her singing transcends.
Dragonflies hover as the meadow's beauty blends.
Then off she glides carried by two luminous wings.
Meadow myth which only a child's hope can bring.
By Jacqueline Ann Piech
05/26/2007

*Poems and more by Jacqueline Ann Piech*
All poems and stories belong to the author and are forbidden from being
reproduced and used for commercial purposes without the expressed written consent of the author.